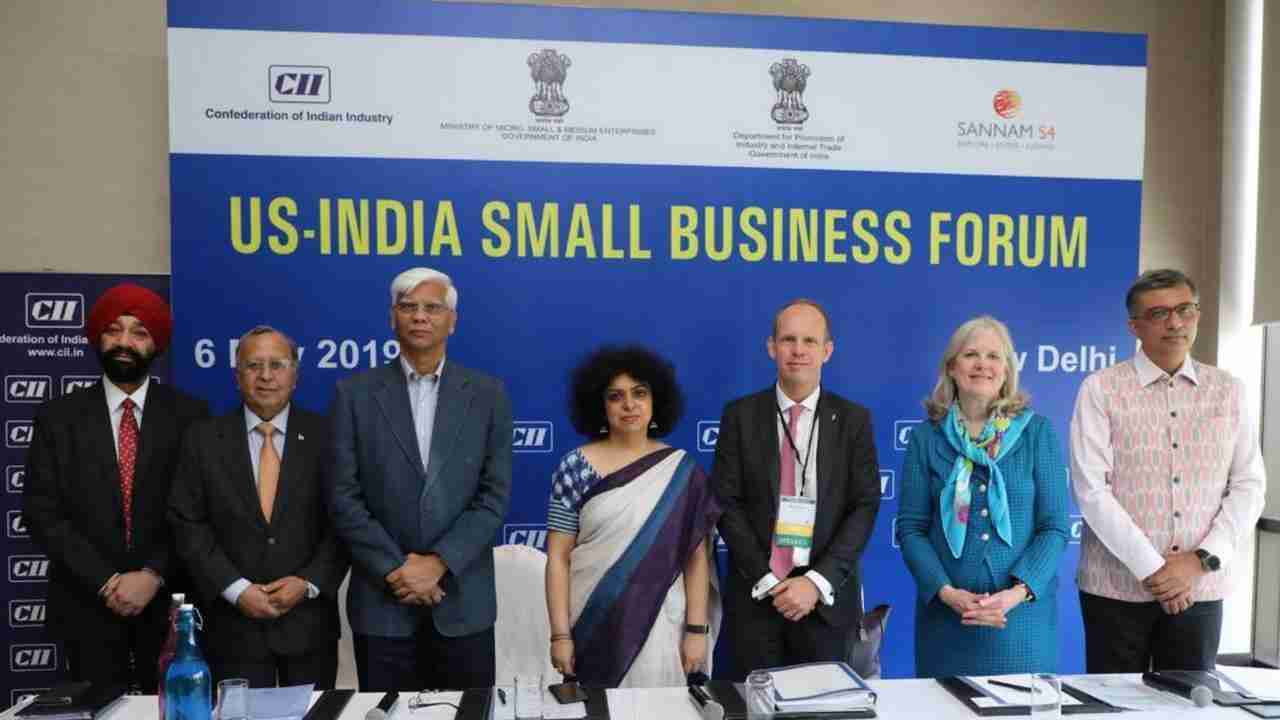 Sannam S4 supports U.S. Department of Commerce, Government of India and the Confederation of Indian Industry (CII) to boost U.S.-India trade and investment between small and medium-sized businesses

With a long standing commitment to supporting the target of achieving $500bn of two-way trade and investment between India and the United States, leading market entry firm, Sannam S4, today supported the first U.S.-India Small Business Forum (Forum) held in New Delhi as part of the U.S. Department of Commerce’s Trade Winds Indo-Pacific Forum and Mission.

The Forum, convened by the Government of India Department for Promotion of Industry and International Trade (DPIIT), Ministry of Micro Small and Medium Enterprises (MSME), U.S. Department of Commerce, Confederation of Indian Industry (CII) and Sannam S4, hosted 50-60 companies from both countries with the objective of establishing a framework to increase cross border trade and investment between India and the United States.

The Forum follows the U.S. Government and Government of India Joint Statement on the Fourth India-U.S. Commercial Dialogue held on February 15, 2019, which “expressed interest in facilitating partnerships among businesses and institutions with a view to encourage best practices, conducive policies, and collaboration for SMEs in both countries”. The Commercial Dialogue, co-chaired by Minister of Commerce, Industry and Civil Aviation of India Mr. Suresh Prabhu and U.S. Secretary of Commerce Mr. Wilbur Ross discussed addressing resource gaps for SMEs accessing the respective markets as well as the support provided by governments to U.S. and Indian exporters, including details on relevant tariffs and trade policies.

“India and U.S. have many complementarities like positive geo-political environment, entrepreneurial, resourceful spirit & democratic values. The strategic partnership between U.S. and India opens new arena for strengthening the friendship and exploring new trade opportunities between the two countries. Given that both the country’s growth is proportional to the growth of their SMEs, we can endeavor on building a symbiotic environment of advancement and development of the SMEs. In this backdrop, it is now important to plug in the long-term initiative of the Small Business Forum. And today’s small business forum is a step forward towards achieving this larger objective, as it is to enable mutually-enriching collaboration and foster rapid, healthy and sustainable growth of U.S.-India SMEs,” said Mr. Shreekant Somany, Chairman, CII National SME Council.

“Small and medium sized businesses drive economies. Today’s Forum was a great platform to enable them to complement the bi-lateral trade and investment of large U.S. and Indian multi-nationals,” said Michael Green, General Manager, Sannam S4 India. “The U.S. and India is one of the world’s most exciting emerging partnerships. The U.S. has technology, diversified products and services, a strong research base and capital and India has an enormous and expanding consumer base, with over 500 million people who are under the age of 25 and is world’s fastest growing large economy,” adds Green.

“We were delighted to be invited to contribute to today’s Forum focused on boosting bi-lateral trade between SMEs from the U.S. and India. As a Strategic Partner to the U.S. International Trade Administration (ITA), U.S. Department of Commerce and lead supporter of the Trade Winds Indo-Pacific Forum and Mission, at Sannam S4 we are playing a leading role in helping the U.S. and India achieve its target of $500bn in two-way trade and investment from the $142bn mark currently. Through our discussions today we have agreed a number of key actionable initiatives to support this,” says Adrian Mutton, Founder & Chief Executive, Sannam S4. “We have seen the level of success that can be achieved if foreign companies are given the right support when they are exploring, entering and expanding in India. The opportunities exist and with enhanced public and private sector collaboration between both countries the potential is virtually unlimited for small and medium sized companies from both countries,” said Mutton.